Bitcoin touched $7500. In the light of the recent discounts on the market we would like to introduce you to the perspective of the independence of bitcoin and its users.

Banks, payment institutions, financial institutions and governments are all entities, sometimes strongly demonized among the crypto-currency community. After all, what period of time does bitcoin come from? The manifesto was published in 2008, when the financial system failed us once again.

Bitcoin is not a substitute for this system, it is an ‘electronic cash system’, which is an alternative means of exchanging value without any intermediaries. In addition to being a means of exchange, the institutions also offer a range of financial services, treatments that digital gold does not know about. On the other hand, does anyone need it?

One of the well-known traders commenting on the crypto-currency reality on the web seems to summarize this issue accurately. If it weren’t for this, decentralised digital currencies might never have been created, so “how can governments easily stop bitcoin?

Would such a radical move, seemingly unrealistic at the moment, improve the functioning of the global financial system?

The three largest bitcoin transactions ever made

This independence, the alternative in question, is intended to confirm the thesis that bitcoin and crypto are to stay with us for longer. After all, it gives us the opportunity to move capital, not fully, but always outside the system.

We are not only talking about small amounts of cash, but also about huge amounts of money, unimaginable for an average bread-eater. An example of this is the three largest bitcoin transactions that have ever taken place. 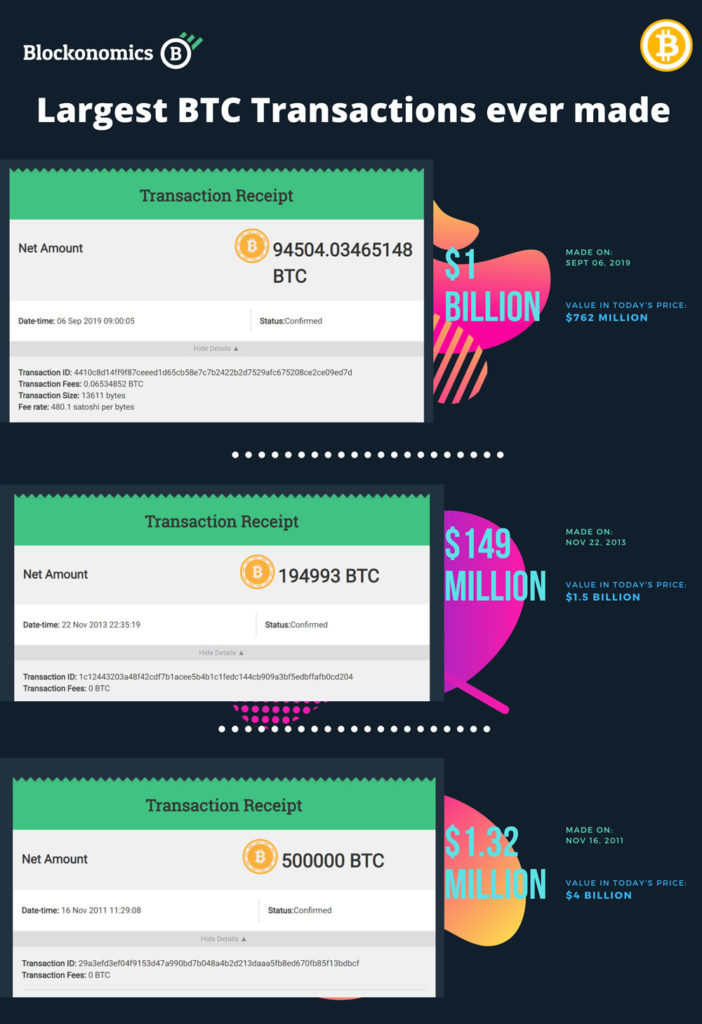 In the years 2011, 2013 and 2019, transactions worth nearly 1 billion USD were made within September-November. If converted at the BTC exchange rate quoted today, the amount would amount to USD 6 billions

The three transactions, but also the large ones, which were not included in TOP 3, were carried out without anyone’s consent. This was made possible by the system of decentralised directness. What is more, it continues to do so and will probably continue to do so at relatively low cost. Judge for yourselves and write about it in your comments.

Travon Temple
View More Posts
Witold Adruszczak CEO of the Bitcoin-Squad.com project for 3 years associated with the crypto industry. This year we have decided on an international project. Our goal is to build Bitcoin awareness in the world. Education and support for people with no experience in the new industry which are cryptocurrencies. If you need more support please write in the comment. For all I always try to answer questions under the articles.

The most popular films and series with a cryptocurrency theme!

Women who change the cryptocurrencies world

Chiliz has integrated with Chainlink. What are the benefits of this cooperation?

Which technologies in 2020 should not be invested in?

Which crypto have a chance of defeating Bitcoin in 2020?

Bitcoin was considered as money in France

Women who change the cryptocurrencies world

Bitcoin was considered as money in France

Statistics – exactly how many people use Bitcoin?